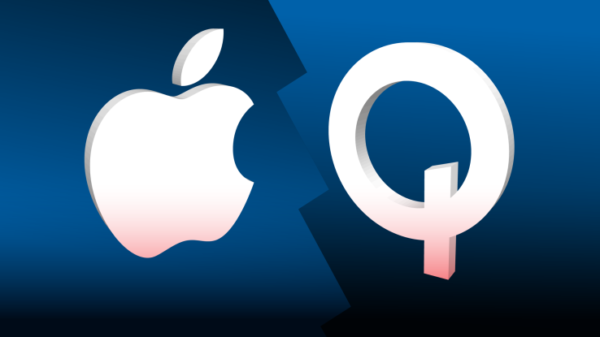 Apple and Qualcomm—two tech giants—are in a legal war. At the heart of this war is intellectual property. And at the rate it is going, it looks like this is going to be another long and vicious war—just as it was with Apple and Samsung.

Apple is Qualcomm’s biggest customer. It’s rated the world’s most valuable brand. By revenue, Apple is the world’s biggest information-technology company. It is also the world’s third largest mobile-phone manufacturer, coming after Samsung and Huawei.

Qualcomm is Apple’s wireless-chip supplier. It’s an American multinational semiconductor- and telecommunications-equipment company that develops wireless technology. It also designs chips for mobile phones. Qualcomm has key patents in CDMA and OFDMA technologies—the backbone of all 3G and 4G networks. It licenses these patents to smartphone manufacturers, including Apple, LG, and Samsung.

Things fell apart when Qualcomm—who was until now the apple of Apple’s eyes—lost its place when Apple appeared to have eaten the forbidden apple: monopolistic contracts, extortionist pricing practices, patents infringements, and other poisons alleged against Qualcomm.

It’s a legal war over intellectual property—who owns what; what is payable as royalty for what; and who Apple can work with or not work with under Qualcomm’s exclusive patent-licensing contract. This picture makes Apple look like an unhappy wife who badly wants a breath of fresh air from a jealous husband. But is this the true picture?

First, Apple alleges that Qualcomm charges big royalties for Apple’s use of its wireless technology. Second, Qualcomm requires Apple to pay to it a percentage of revenue from Apple’s iPhone. This is in return for Apple’s use of Qualcomm patents. Apple believes Qualcomm is biting too much off Apple, hence the legal action against Qualcomm. Third, Apple alleges that Qualcomm’s Snapdragon mobile-phone chips infringes on Apple patents.

Qualcomm has not only counterclaimed but also countersued, claiming patent infringements on 3 major grounds.

The first and second grounds relate to Qualcomm’s allegation that Apple uses Qualcomm’s patent which make iPhone battery lives longer. The third ground is that Apple iPhones containing Intel-made chips violate its patent, thus should be banned in the US. Qualcomm also wants both manufacturing and sale of iPhones to be banned in China. Qualcomm has also sued Apple for 5 other issues. One of these issues is that Apple is deliberately not using Qualcomm’s chips in iPhone 7 products so they don’t outperform Intel-made modems used in iPhone 7. Qualcomm is also unhappy about Apple’s role in Qualcomm’s misfortunes with regulators who have been fining Qualcomm based on alleged facts misrepresentations and false statements by Apple.

The dust and earthquake both parties have caused in the ongoing legal war have attracted regulators’ attention.

This should be expected. Both Apple and Qualcomm are big tech kingdoms. Anti-trust regulators would be concerned about how Apple and Qualcomm’s nature of business relationship may hurt competition in the wider domain. In Europe, regulators discovered that from 2011 to 2016, Qualcomm had been paying Apple to use its chips and keep its fingers off competitors’ chips. Qualcomm was fined $1.2 billion a few days ago.

Though the Apple-Qualcomm legal war may have just begun, I briefly draw below 4 points you need to note.

Any lessons for computer-hardware and mobile-phone manufacturers, and technology companies?

Yes, from the 4 points just discussed above, I got 4 lessons below: